Due to the NHL Heritage Classic being played at Mosaic Stadium, we have moved our game to the Doug Wickenheiser Arena October 26 at 4pm.  1127 Arnason Street N, Regina.  Come and cheer loud at the new and improved Doug Wick!

PAT CANADIANS NO LONGER HAVE AN IMPORT RATIO

The Regina Pat Canadians for the past several years, have abided by an agreement which stated that the Pat C's could have no more that 5 players from outside of Hockey Regina jurisdiction.  This rule has been lifted by the HRI Board.  this mirrors the rule in place for the Female Division AAA team.  Also, it is anticipated that this rule change was going to be recommended by the SHA for the 2020 - 2021 season as it moves froward with the changes to the SMAAAHL. 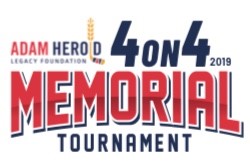 Please join the Regina Pat Canadians at the Co-Operators Centre on June 22nd and June 23rd for the Adam Herold 4 on 4 Memorial Tournament.

The tournament is to honour and remember our team member, Adam Herold,  to promote fun, respect and camaraderie.  The tournament will also feature the grand opening of the Adam Herold Memorial Room.

The Competitive Division is expected to be teams comprised of Midget AAA / Junior / College / Pro players.  The Fun Division will be players who want to play to support the cause and are not interested in the competitive side.

Each team is guaranteed 4 games - each game 1 hour in length (5 min. warm up - 55 minutes straight time) - followed by a flood after each game and a 2 referee system.

On Saturday, June 22nd and possibly on Sunday June 23rd each team will play the other 3 teams in their Pool - teams then would be seeded teams 1 - 4.  Sunday afternoon will consist of each team playing one final game with their counterpart from the other Division pool.

The Adam Herold Cup will be available for team pictures for each Team after their last game - this is to promote FUN, CAMARADERIE. RESPECT, SUPPORT!!

The Host Committee is looking for SPONSORSHIP for this event - this will allow for some of the "the extras" that will make this event even better than we anticipate.  These items include but are not limited to food, beverages, memorabilia, silent auction, etc.

This event also coincides with the GRAND OPENING OF THE ADAM HEROLD MEMORIAL ROOM.  This is a newly constructed facility on the concourse of C2 which will have a new Players lounge, Therapy Room, Equipment room and a coach's office for all Pat Canadians and staff.  The Herold family will be there to "cut the ribbon" and officially open the facility that was built in the memory of Adam.

Teams can be entered by contacting Darrin McKechnie at dmckechnie@reginapolice.ca or call 306-550-4261.

Any single players wishing to play can also contact Darrin and will be placed on a list for the teams looking for players in the respective divisions.

Manage your identity from the palm of your hand to the top of your desk.